State, Local Officials Stand by Foxconn, But Many Wonder What the Company is Doing Here 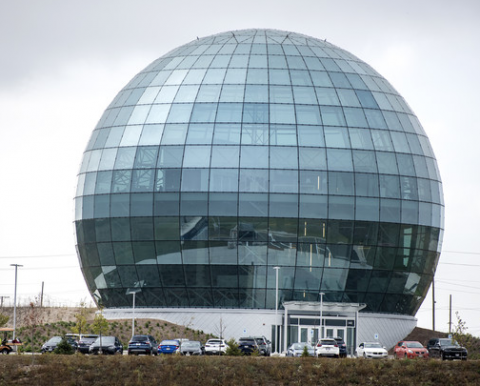 (WPR)---Foxconn never promised it would manufacture electric vehicles in Wisconsin. But when the Taiwanese mega-manufacturer announced earlier this year it planned to get into the automotive business, some thought it would finally turn around the company’s lackluster performance in the state.

Foxconn has been making high-profile announcements that have either severely underperformed or been quietly abandoned since arriving in Wisconsin in 2017.

Last week, the company struck a $280 million deal to purchase electric automaker Lordstown Motors Corp.’s plant in Ohio. From a business standpoint, it makes sense to build cars at an abandoned car plant, instead of at nondescript buildings in the Village of Mount Pleasant.

But it begs the question, what is next for Wisconsin?

Local and state representatives continue to defend their attachment to the company. In a statement released Thursday, Village of Mount Pleasant officials stood by Foxconn.

"As Racine County’s largest taxpayer, Foxconn is an important partner to the Village of Mount Pleasant and Racine County," the statement says. "We look forward to Foxconn’s continued growth and investment in our community for many years to come."

After the Ohio announcement last week, WPR contacted Foxconn about the company's future plans for Wisconsin but received no response.

During an interview with WPR's "The Morning Show" Tuesday, Missy Hughes, who heads the Wisconsin Economic Development Corp., said her agency "talks to Foxconnn all the time."

"They’re a partner of ours, and we work with them," Hughes said.

As far as the village’s investment in the giant manufacturing campus there, Hughes said Foxconn has invested more than $200 million in the village over the last two years.

"We continue to work with the locals to make sure that we’re doing everything we can to attract business to that area to help support them and yeah, the investment they made in reliance to Foxconn coming," Hughes said.

Assembly Speaker Robin Vos, R-Rochester, said in an interview last week, almost 1,000 people are working at Foxconn in Wisconsin. That number hasn’t been confirmed. If true, it would make Foxconn one of the state’s largest employers.

In April, the state revised its $2.85 billion contract with Foxconn to create more realistic goals including the creation of 1,454 jobs by 2024 instead of the original 13,000 jobs promised.

What is happening in Racine County?

One of the complaints Racine County residents and some politicians have with Foxconn is that they are unclear what type of work is being done in those buildings.

Hintz, who is a WEDC board member, said the company announces plans that "captures the public’s imagination," including manufacturing coffee kiosks, ventilators and now electric cars. But he would like an update on what is actually happening in Wisconsin.

"Even if there was a decision made on something going forward, it would need quite a bit of development before there was actual production," Hintz said. "We’re four years in and don’t have a lot to show for all the taxpayer money that has been spent."

Hintz said even if there is bad news, Foxconn and WEDC need to be more accountable to the state about what is happening.

"I think there are probably endless proposals not just with Foxconn directly but perhaps with someone that can work with Foxconn on the site that exists," Hintz said. "I want to see the most successful project that we can have there, whether Foxconn or a surrogate for another company that we can have there. My mind can run away with opportunities there can be to have multiple companies there."

Mount Pleasant and Racine County created a $911 million special taxing district in 2017 to support the Foxconn project. So far more than $300 million has been spent by the village.

Local officials said the money would pay for land acquisition, infrastructure upgrades and other expenses. According to the agreement, the money will be recouped over 30 years with funding and property tax revenue from Foxconn and other businesses in the district.

Local officials have repeatedly said they are protected because Foxconn must make minimum tax payments equal to about $30 million beginning in 2023, regardless of the project’s completion status.

If Foxconn defaults, the state is on the hook for a portion of the payments.

Greg LeRoy, executive director of Good Jobs First, a Washington-based nonprofit tax-break watchdog group, said that at this point, Foxconn should pay reparations to the state and local governments for the money already spent on the project.

"(Local governments) went way out on a limb, incurred a lot of future debt obligations, displaced a lot of people through eminent domain, and now, there’s not a lot to show for it and I think the only reasonable take back is for the company to say we asked for too much, and we’re going to give it back to you," LeRoy said.

Even with the safeguards in place, LeRoy said special financing districts aren’t just about paying back the bonds.

"The whole point on making a public investment is to capture the ripple effects and none of that is going to happen now," LeRoy said. "You don’t want to just barely get covered on the debt, if the debt isn’t paying off, it’s not economic development anymore."

LeRoy said often public officials get too caught up in believing in a company and cling to the hope that something could happen. He believes that is what has happened in Wisconsin.  "Sometimes they’ll march over the cliff on a bad deal with a company," LeRoy said. "I don’t know these people in Racine County and Mount Pleasant, but boy after all this bad faith and all the signals and all the empty buildings and all the improbability of the original deal, I don’t understand why they haven’t woken up yet."

Kelly Gallaher heads the local watchdog group A Better Mount Pleasant. She said residents would like to know what Foxconn’s intentions are and then see the company follow through on their promises.

"Not just dangle something in front of the community of what they might do, but to say this is an appropriate site for this so we can all just move on," Gallaher said. "We’ve been dangling for four years now, and we don’t know anything more than we did four years ago. It’s unfair and unprofessional."