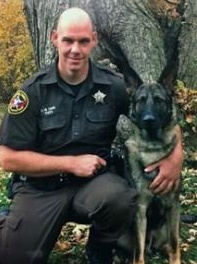 (WGTD)---A police dog took down an armed suspect in Bristol Thursday morning after he was spotted at the Benson Corners Shell station at Highways 45 and 50.

Before it was over, K-9 Riggs had suffered a bullet wound to the forehead while the suspect sustained wounds to his abdomen and a leg. The suspect was shot by one or more deputies, according to Kenosha County Sheriff Dave Beth, while the dog was purportedly shot by the suspect.

The suspect was wanted for a homicide in Chicago.

Speaking to reporters at the nearby Kenosha County Center Thursday afternoon, Beth called Riggs a hero. He says Riggs prevented the suspect from running out onto Highway 50. "Who knows if he would've gone up there and tried carjacking somebody at gunpoint," said Beth. "In my world, Riggs is a hero and possibly saved somebody else from being injured," he said.

Beth said the department received word that the suspect was at the gas station driving the homicide victim's vehicle around 11 a.m. Three deputies arrived at the station almost simultaneously. The suspect, Beth says, ignored deputies' commands and took off running. Riggs was released and tripped up the gunman, who then apparently fired at least one shot, striking Riggs in the forehead right above the eyes.

Riggs is expected to survive following surgery, but his future with the department is uncertain, Beth said.

Riggs has been on the force for 7 years, according to the department's website. His handler is Deputy Terry Tifft, who was described by Beth Monday afternoon as being "emotional."

The Racine County Sheriff's Dept. is handling the investigation.

The westbound lanes of Highway 50 were blocked for hours Thursday.