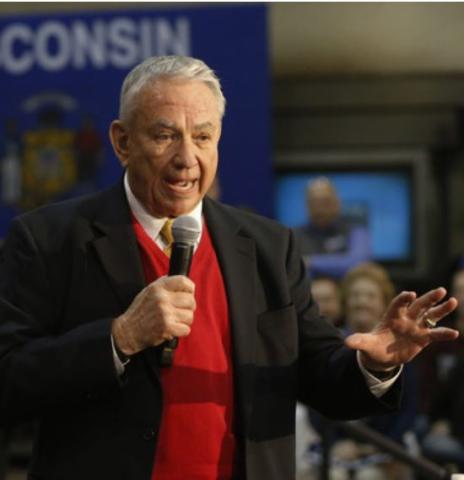 The former Wisconsin governor took on the role July 1, 2020, after being hired that June by the system's Board of Regents. Thompson has been filling the void after a failed search for a replacement for former UW System President Ray Cross, who retired in 2020 after serving as president since 2014. Thompson was 78 at the time of being hired for the interim role.

Thompson submitted his letter of resignation Friday to Board of Regents President Edmund Manydeeds, the same day a special regents committee would meet to select finalists to replace him.

Thompson said it has been an honor serving as system president "particularly through what could have been its darkest time."

"While challenging on many fronts, we worked together to continue to provide the quality of education our students deserve and parents expect," said Thompson.

System campuses closed their doors in spring 2020 once COVID-19 began to rapidly spread throughout the state, and classes went virtual. And the start of the 2020-21 school year had its challenges with entire dorms entering quarantines and three campuses shutting down for two weeks.

Thompson told Manydeeds as of October, "every campus in our system was financially stable."

"In incredibly challenging times for campus administrators, faculty, academic and university staff, and our students and their families, we were able to balance the books and formulate responses to lagging state investment and a continued freeze in tuition," said Thompson.

Thompson has been a vocal proponent of system employees and students being vaccinated against COVID-19, coining the term "Smash COVID."

Thompson has traveled to campuses across the state to rally students to get vaccinated. At one stop at UW-Eau Claire event, Thompson, chancellor Jim Schmidt and students took swings at a carnival-style game with a large wooden mallet. The mallet has become famous after Thompson appeared in multiple videos obliterating various fruits with it to illustrate the former governor's intention to "Smash COVID" at campuses.

In a statement, Manydeeds thanked Thompson for his leadership over the past year and a half.

"Tommy Thompson was the right man at the right time," said Manydeeds. "His leadership has helped us carry through a pandemic and set the standard for managing during crisis. As important, President Thompson has been a relentless champion of the University of Wisconsin."

In Thompson's letter, he said regents will identify a permanent successor "soon."

"While I firmly believe that the pursuit of excellence never ends, I am satisfied that I have accomplished what has been asked of me and what the people of this state have sought," Thompson wrote.