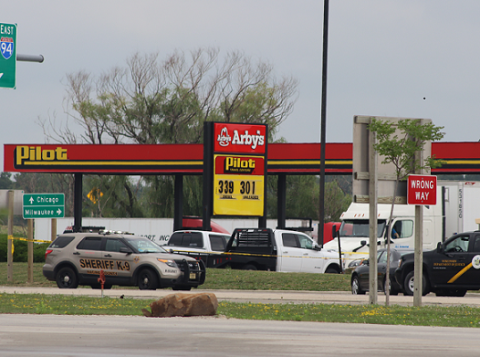 (WGTD)--- A gunman killed an Elkhorn man "execution style"  as he was pumping gas at an I-94 gas station in Racine County Tuesday morning. A short while later, at a nearby gas station, the gunman traded gunfire with an undercover sheriff's department investigator and was killed. The investigator--a 21-year veteran of the force-- was shot and is being treated at a Racine hospital.

The chain of events which began to unfold at 7:30 a.m. were recounted by Racine County Sheriff Christopher Schmaling at an early-afternoon appearance before reporters. Schmaling took no questions.

The names of those involved were not released. Nor was a motive for the gunman's actions.

Before leaving the plaza and moving on to the second station, the gunman shot at but did not hit another driver, according to Schmaling. The shootings were captured by a surveillance camera.

The gunman was spotted racing into the parking lot of a Mobil station a few miles east of the interstate. Caledonia police, who'd been in the area, witnessed the gunman approach another driver who was pumping gas and start shooting.

Apparently unbeknownst to the gunman, the man was an undercover sheriff's investigator who beginning his shift, according to Schmaling. The deputy pulled out his own gun and traded gunfire with the suspect. The Hartland man was killed while the deputy was taken to the hospital, "conscious and alert," Schmaling said.

Schmaling credits the actions of the injured deputy with saving lives. "There is no doubt in my mind that the quick and heroic actions of our investigator saved lives today," Schmaling said.