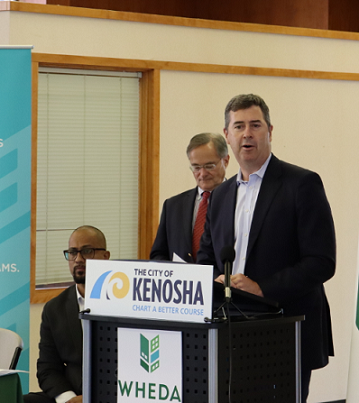 (WGTD)---Three top members of Gov. Evers’ administration were in Kenosha Friday to demonstrate the governor’s continued commitment to the city as it continues to recover from last summer’s civil unrest.

The appearances came as Republicans continued to accuse the governor of failing to adequately respond to local officials’ requests for help following the Blake shooting last summer. Both Mayor Antaramian and County Exec Kreuser have denied that was the case.

In Kenosha Friday were Administration Secretary Joel Brennan, Revenue Department Secretary Peter Barca, a former state legislator from Kenosha, and Joaquin Altoro, CEO of the Wisconsin Housing and Economic Development Authority. All three participated in the formal announcement that an Uptown row of buildings that were damaged in last summer’s riots will be replaced by a $25 million mixed use development consisting of apartments and commercial space. The project will be funded in part by state tax credits.

Brennan, who's been in Kenosha nearly a half-dozen times since last summer,  told the gathering that more help from the state is forthcoming. "What we should and what we will do is come back with those resources and commit continued resources to Kenosha's recovery and your rebound and what's coming down the pike," he said.

Among other things, the city is looking for state help in funding the Kenosha Innovation Neighborhood—that’s the development planned for the former Chrysler site.

Construction is expected to begin this fall on the $25 million Uptown Lofts building, a mixed-used development consisting of over 100 apartments and three commercial spaces which have been reserved for a restaurant, Hispanic grocery store and a furniture store, all businesses that were burned out in last summer's arsons.

Antaramian said the Uptown Lofts project should be considered in the context of other developments that are in the works. "Kenosha is on the verge of a huge number of different projects that are happening, and they're exciting," he said. "We're looking at our community and saying what can we do better. How can we improve the quality of life for the people of Kenosha. But, most important....what can we do to make sure our young people  have an opportunity,"

Friday morning's event was held in the former Brown National Bank Building located just half a block from the Uptown Lofts project. The old bank building is in the process of being converted into a community center to allow a host of non-profits and schools to have a physical presence in the area.