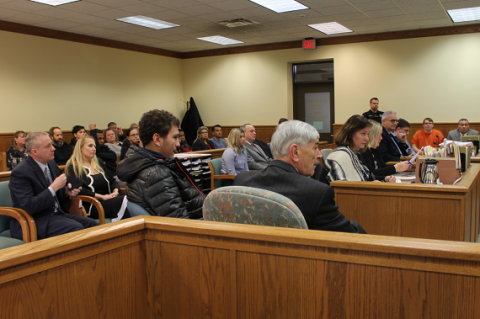 (WGTD)---Courtney Huffhines joined her two sons and five others who've all been implicated to varying degrees in Kenosha County's THC vape manufacturing case for a short pre-trial hearing Thursday.

Extra chairs had to be lined up in Judge Mary Kay Wagner's courtroom for the defendants and their attorneys.

Because of the volume of evidence, the attorneys asked for extra time to review the material. The next proceeding was scheduled for Apr. 20th.

All of the defendants--with the exception of the two Huffhines brothers--Tyler and Jacob--are out of custody on bond. The brothers--wearing jail jumpsuits-- were escorted in and out of court in handcuffs by deputies.

Although all of the cases are currently consolidated, indications were that at least some of the defendants will ask that their cases be heard separately.

Four of the 7 defendants have been described as employees.

His attorney argued that Graumenz had a lesser role. The special prosecutor did not object to the defense request.

Graumenz told Wagner he has a job and is enrolled at Gateway Technical College to obtain a high school equivalency degree.