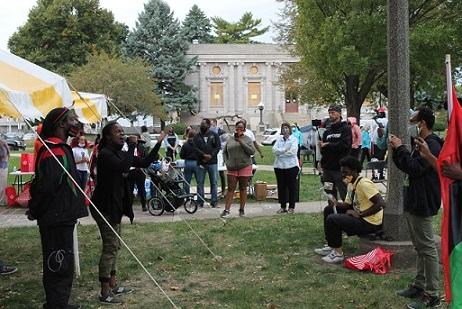 (WGTD)---The one-month anniversary of the police shooting of Jacob Blake was marked in Kenosha with another mayoral-led listening session and the start of a 24-hour-long vigil in Civic Center Park.

Speeches and other activities are taking place, and at least some participants planned to camp out to draw attention to the need for police reforms. Speakers also called for charges to be brought against the officer who shot Blake. The vigil was scheduled to end at noon on Monday.

Meanwhile, the second of four planned, healing and rebuilding forums that are being led by Kenosha Mayor John Antaramian took place at 2nd Baptist Church on the city's north side. Because of COVID-19, attendance was capped, although the event was streamed live.

Speakers offered specific suggestions for change. Some spoke passionately about their concerns and observations.

Tenisha Williams-Jelks said it's possible to support both Black Lives Matter and Back the Blue. "You can support both and still understand that systemic racism exists," she said. "There are wonderful police officers that serve and protect but we also want to hold each side accountable."

Brian Monroe said repairing the damage done to police community relations by the Blake shooting and other high-profile cases around the country won't be easy. "Trust has to be earned," Monroe said. "Granted, I understand that it's on both ends but coming from where I'm from it's going to have to be a whole lot to get that trust earned."

Alana Carmickle is a 16-year-old student at Indian Trail where there's a large White majority. "They're sometimes very ignorant on Black issues and Black culture and sometimes they don't seem to take it seriously," said Carmickle, adding that offering a greater number of African-American history and culture classes would help.

Billy Violet suggested implicit bias training for members of the city council, county board, law enforcement and the general public.

If anyone thinks that racist attitudes don't exist in Kenosha, Essie Bennett relayed the story of her six-year-old granddaughter being told by a classmate last year that she couldn't sit at the classmate's table because she is Black. "Where does that come from,?" Bennett asked. Bennett said she was proud of her granddaughter responding the way she did. The child told the classmate that she had other tables she could sit at, and that she and the classmate didn't have to be friends.

Michael Bell, the Kenosha man whose son was killed by a Kenosha police officer a number of years ago, also spoke. He reminded those in attendance that many of his suggestions for police reform in Kenosha have been ignored. He asked Antaramian to look into recent policy changes made by the Madison Police Dept. and Antaramian responded by saying he would look at those reforms as well as policy changes made by other departments.