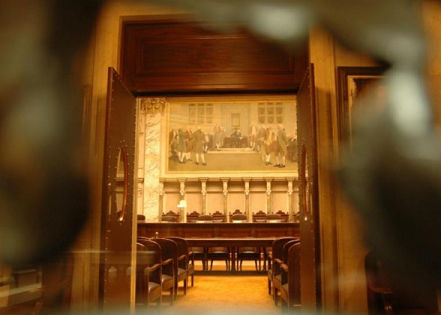 The long-awaited decision was released Wednesday morning, more than four months after the court heard arguments in the case. The court ruled 4-3, with all conservative justices in the majority and liberal justices offering a dissent.

"The question in this case is not whether the Governor acted wisely; it is whether he acted lawfully," conservative justice Brian Hagedorn wrote in the court's majority opinion. "We conclude he did not."

The lawsuit, brought by GOP donor Jeré Fabick, argued Evers overstepped his powers by declaring multiple states of emergency related to the same issue — the COVID-19 pandemic — without approval from the state Legislature.

In the majority opinion, Hagedorn wrote the decision isn't, and shouldn't be, about making sure the governor has the power to respond to the pandemic adequately or ensuring executive powers aren't too expansive — it is about whether Evers followed the law.

Evers, who was represented by the state Department of Justice in the case, argued his repeated declarations were warranted, as the pandemic has evolved and posed different threat levels since its appearance in the state last spring. The governor also pointed out state lawmakers have the power to revoke an emergency declaration if they want, a step GOP leaders didn’t choose to take until February. Evers immediately issued a new order following the repeal.

In a statement following the ruling, Evers said masks need to be worn to slow the spread of the virus and save lives.

"Since the beginning of this pandemic, I’ve worked to keep Wisconsinites healthy and safe, and I’ve trusted the science and public health experts to guide our decision making," Evers said in the statement."Our fight against COVID-19 isn’t over — while we work to get folks vaccinated as quickly as we can, we know wearing a mask saves lives, and we still need Wisconsinites to mask up so we can beat this virus and bounce back from this pandemic."

In addition to striking down the statewide mask mandate, the decision puts tens of millions of dollars a month in federal food aid to Wisconsin at risk. A state must have a pandemic emergency declaration in place to receive the funding. According to a memo from the Legislature’s nonpartisan budget office, about 242,000 households in Wisconsin received about $49 million in additional federal food aid in January.

Wednesday's ruling is not the first time the court has significantly reined in Evers' authority during the pandemic. Last May, the court's conservative majority struck down his administration's "Safer at Home" order, which put statewide limits on gatherings and businesses.

From the Office of Gov.... Read More