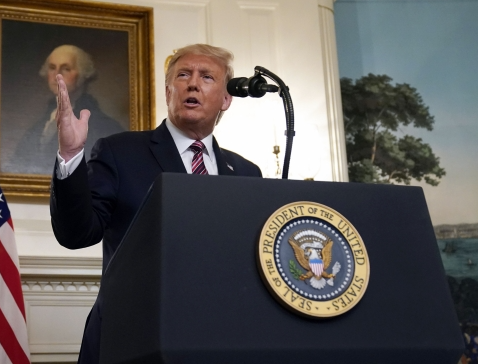 (WPR)---Two days after a violent mob took over the U.S. Capitol, the nation's top Democrats are calling for the removal of President Donald Trump before his term expires — and every Democratic member of Wisconsin’s congressional delegation is at least considering it.

All four of the Democrats in the state's congressional delegation have called for Vice President Mike Pence to invoke the 25th Amendment to remove Trump from office and all but U.S. Rep. Ron Kind, D-La Crosse, have called for Trump's immediate impeachment.

Either step would require some bipartisan cooperation in Congress, less than two weeks before Trump is scheduled to leave office.

But the Constitution also gives the sitting president the chance to argue that he is fit for office and make his case before Congress, where two-thirds of the U.S. House of Representatives and Senate would have to decide on the outcome.

Similarly, while Democrats will soon hold majorities in both chambers of Congress, impeachment would also require a two-thirds vote to convict in the Senate, which would require Republicans to sign on.

Democratic US Sen. Tammy Baldwin
Baldwin issued a statement on Thursday in support of removing the president from office, either via the 25th Amendment or impeachment.

In the statement, Baldwin accused Trump of "(inciting) a violent insurrection against Congress."

"This attack on our democracy makes it clear he has broken his oath to support and defend the constitution, and that he is unfit to serve," she said.

She urged Pence to invoke the 25th Amendment, "so that the American people can have confidence that there will be a peaceful transition of power in the few remaining days of this disgraceful and dangerous presidency."

She said if the vice president "fails to act," Congress should move to impeach the president.

In an interview with NBC News earlier this week, Johnson said Trump shouldn't be held accountable for the actions of the violent mob that overtook the Capitol.

Johnson didn't vote to uphold objections to 2020 presidential election results on Wednesday, but released a statement shortly after the vote outlining his rationale for initially planning to object.

Fitzgerald’s office didn’t respond on Friday to a request for comment from WPR about the 25th Amendment or impeachment.

"More than anything our country needs reconciliation," Gallagher said. "The best, most immediate way we can do so is by repeatedly and thoroughly endorsing the peaceful transition of power."

Gallagher referenced a video Trump released on Twitter Thursday night where he for the first time conceded the election.

"I am glad that President Trump did that in his video statement tonight. The transition — not the removal of the president — should be our priority."

"No, no, no, President Trump is going to be stepping down," Grothman said. "I mean the idea of rushing back to Washington and having another circus would be very unproductive."

"I'm a bit skeptical given the time limitation that we have," Kind said. "I'm a little worried, too, about the precedent that could be established by rushing to an impeachment formality in Congress without the due diligence, without the necessary hearings and the evidentiary fact gathering that should take place."

Kind said the best option would be for Republicans in Congress to pressure the president, comparing Trump's situation to that of former Republican President Richard Nixon.

"I think ultimately what would influence the president the most is if more of my Republican colleagues in Congress went to him and asked for his resignation and to make clear that they no longer have his back and that if he refuses, that they then would be supporting an article of impeachment against him," Kind said.

Kind said if Trump won't step down, forcing him out using the 25th Amendment would be appropriate.

"He is still president of the United States, which means he is still in control of the most formidable military in the world and tremendous other types of resources," Kind said. "And the power of his words still influence millions of Americans, as again we saw last Wednesday."

Democratic US Rep. Gwen Moore
U.S. Rep. Gwen Moore, D-Milwaukee, was one of the first members of Wisconsin's congressional delegation to call for Trump's removal through the 25th Amendment, and later through impeachment.

"Trump has incited this chaos & violence. The 25th amendment must be invoked. If not, Congress must impeach & convict Trump," Moore tweeted Wednesday afternoon, hours after the Capitol insurrection.

"13 days is simply too long to permit him to remain in power where he has access to his sycophants at the Department of Defense and the formal levers of power. America can't wait, Trump must be removed now," Moore said in a written statement Thursday.

Democratic US Rep. Mark Pocan
U.S. Rep. Mark Pocan, D-Town of Vermont, told WPR's "The Morning Show" that while he supported the idea of impeaching Trump, the process would take too long, making the 25th Amendment the preferred alternative.

"It's the quickest way to do this, you know, we can do impeachment and you can even do it after he's left office just to make sure that, you know, we don't allow any president to think they can get away with this ever again. But it's not a very quick process," Pocan said.

"But the 25th Amendment could happen within hours if the cabinet and the vice president got together and said, look, what he's doing is dangerous to the country, we have to remove him," Pocan continued. "It is the most effective way to make sure that we don't have additional problems in the next two weeks, but that people have to stand up and have a backbone."

Pocan said he was hearing there was a chance the House could start the impeachment process next week, but he stressed again that it would not move quickly, especially in the Senate where Democrats remain in the minority until two Democratic senators-elect from Georgia are officially certified as winners and sworn into office.

Steil said that from the riots in Kenosha to what happened at the U.S. Capitol this week, what was needed was for leaders to tone down their actions, not inflame the situation.

Steil's statement did not address whether he supported invoking the 25th Amendment.

Republican US Rep. Tom Tiffany
U.S. Rep. Tom Tiffany, R-Hazelhurst, said Friday he does not support removing the president from office before the end of his term, noting few days remain.

"There are only a few days left of the Trump Administration," Tiffany said in an emailed statement. "President Trump has agreed to a peaceful transition of power. He will leave office and we will move on to the next president."

Tiffany, who was first elected in a May 2020 special election, has been a strong supporter of Trump during his brief time in Congress.