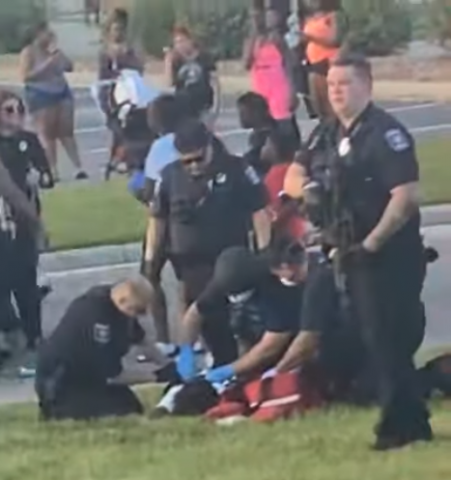 (WGTD)---According to one witness, multiple guns were fired in an incident that injured five young people at North Beach on Lake Michigan in Racine Tuesday evening.

"So many shots that we thought it was fireworks," said 22-year-old Melonie Jones of Racine.

Jones and her two boys, ages 4 and 3, had gone to the beach to unwind after a George Floyd protest.

Jones said an argument occurred among a group of people, but then it seemed things were ok. "Everything was cool for at least 15 minutes before the shots came," she said. Jones estimates that at least 40 shots were fired.

Video that Jones shot at the scene shows paramedics working on patients in the grass, with onlookers milling about while police tried to protect the area.

Police have said little about the incident. Three of the five victims are juvenile teenagers. The adult victims are 18 and 20. All of the victims were taken to the hospital.

Condition reports have not yet been provided.

Jones' video is below

WARNING: The video is extremely graphic. Some of the language may not be suitable for young children.