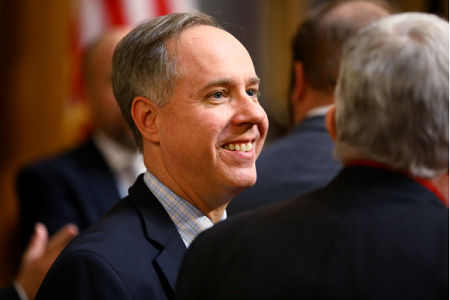 (WPR)---The day before Wisconsin voters headed to the ballot booth, a small group of people led by a candidate endorsed by former President Donald Trump gathered in a field outside Burlington and loaded effigies of Assembly Speaker Robin Vos into a makeshift catapult.

It didn't quite work.

Vos held on with 51.3 percent of the vote in the 63rd Assembly District, but it was the closest call of his political life. He's routinely won reelection in his heavily Republican district by 20 points or more, and hasn't faced a primary challenger in recent years. On Tuesday, his challenger Steen finished with 48.7 percent.

With his Republican primary win, Vos is guaranteed a return to the state Assembly for his 10th term in the district. There is no Democratic challenger on the ballot.

In his speech, Vos had harsh words for former Supreme Court justice Michael Gableman, who endorsed Vos' opponent. Vos, who hired Gableman to lead an investigation into the 2020 election, reportedly said Gableman was "an embarrassment to the state of Wisconsin." A large part of the primary revolved around demands from Trump and his supporters that Vos decertify the 2020 election, a move election experts say is not legally possible. Late in the campaign, Gableman turned on Vos, harshly criticizing him at a Trump rally last week.

At a Kenosha event, Steen refused to concede the race on Tuesday, saying he and his wife would decide on their next steps on Wednesday. Steen called his campaign against Vos a "David and Goliath story."

Vos, R-Rochester, is the longest-serving Assembly speaker in Wisconsin history, and he has helped guide the state Legislature's conservative turn over the last decade. He has been speaker since 2013, and in the Assembly since 2004.

Trump has been in a one-sided feud with Vos since he lost to President Joe Biden in Wisconsin. His criticism escalated with his endorsement of Steen, and with his statements online and at a campaign rally in Waukesha the week before the election.

At the rally, Trump called Vos a RINO, shorthand for Republican In Name Only.

"A lot of people think he's a Democrat," Trump said.

Gableman was initially paid $11,000 per month to lead the Assembly Office of Special Counsel. His investigation has not provided any evidence of widespread fraud and has been caught up in a series of lawsuits.

"His attempts to lie to voters and gain favor with Adam Steen are sad and show how desperate he is to remain relevant," Vos said after Gableman announced his endorsement.

It was Steen's second run for office. In 2018, he came in fourth in the Republican primary for the First Congressional District, with just 10 percent of the vote.

On social media, Vos portrayed Steen's views as out-of-step with voters. Along with his views on elections, Steen told a reporter from the New York Times that if elected he would work to ban contraception, and that he opposes abortion in all circumstances.

"Unlike my opponent in the GOP primary, not one person said we should ban all birth control," Vos said on social media about his meetings with voters Aug. 6. "I also had every single person who said anything about elections today say we need to move on and focus on 2022, not overturning the 2020 election."