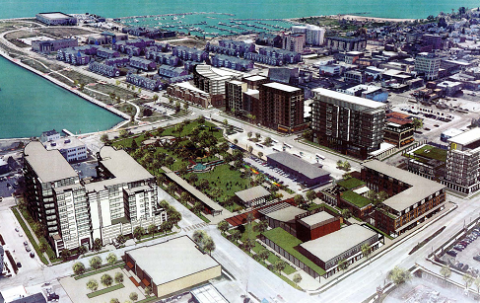 (WGTD)---A $400 million dollar plan to revitalize an eight-block section of downtown Kenosha may be delayed, but it's not dead.

City Administrator John Morrissey confirms that the original developer was unable to pull together financing. He says the city is "in discussions" with other potential developers.

The plan, as outlined in late 2020, included construction of a new city hall and a performing arts center, along with other amenities.

Even without a developer on board, demolition of existing buildings to make way for the new construction has already begun. A building located south of the city's streetcar barn has already been demolished. The wrecking ball is expected to meet the former police department building at Sheridan and 56th this fall. Morrissey said the decision to tear down both buildings sooner rather than later was due in part to the condition of the structures.

Meanwhile, the city remains in contact with the developer of a proposed twin-tower residential high rise that's earmarked for vacant land north of the Municipal Building. Morrissey said the developer just last week indicated that he's still working on pulling together financing, and plans to build a "version" of the project.