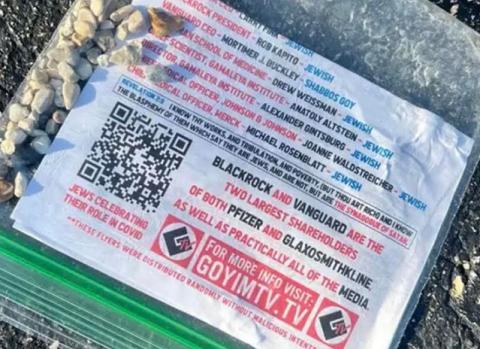 (WGTD)---A 56-year-old Kenosha man was cited this week in connection with the random distribution in some city neighborhoods of antisemitic flyers.

Because the flyers were considered by Kenosha Police to be protected free speech, the man—who was not identified—received 23 municipal citations for littering. Each citation carries a fine of $187 and can be challenged in municipal court.

Weighted down with pebbles, bags containing the flyers started showing up in the early morning hours late last year scattered on sidewalks, lawns and streets. The matter prompted cries of outrage, community meetings and a city council resolution decrying the distribution.

The man was not identified by police in order to protect his safety. “I could identify him; however, given the nature of his actions and the materials he was distributing I imagine there are going to be some people that do not like him and his belief system,” said department spokesman Lt. Joseph Nosalik.

Nosalik said the matter has been under investigation from the start, and third shift officers have been on the look-out. “Several weeks ago a third shift patrol officer spotted some suspicious behaviors and stopped to chat with an individual,” said Nosalik in an email. “Although he did not catch him in the act it was enough information to assign our SIU (Special Investigations Unit) to follow up with.  This unit has much more autonomy and the resources to conduct some more in-depth investigations and it all came together- at least for 23 cases.”

Such activity is a huge deal within the Jewish community because hate language can lead to devastating actions. "It's a pyramid that starts with ideas, and people internalizing ideas," Feingold said. "Seemingly small things at the bottom but then people who read these things online--we see it repeated over and over again with people who have committed terrible terrorist acts," she said.

"You have to take it seriously," Feingold said in a phone interview.