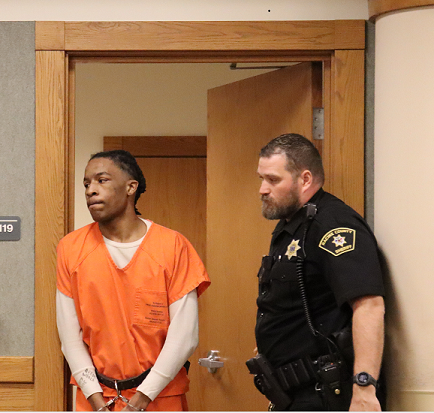 (WGTD)---A 19-year-old Racine man was sent to prison Monday for his role in a daylight gunfight between gang members at North Beach two years ago.

The 13 years handed down to Dashari Watson by Judge Robert Repischak was three years longer than what the prosecution had recommended. "I gotta tell you, Mr. Watson, this community is sick and tired of people like you where people can't go out and enjoy themselves without the possibility of getting shot and killed," Repischak said in making a reference to the increase in 'shots fired' cases.

Five people were injured in the North Beach gunfight—none was killed.

Defense attorney Jeremy Samuels said his client was carrying a gun in the first place because he’d been the victim of gun violence himself. "It wasn't that he wanted to be violent or go looking for trouble," Samuels said. "He needed a gun to protect himself."

Repischak called the notion that Watson wasn't violent by nature rubbish. "You pulled out a gun and started blasting in an open area," he said.

Samuels said Watson was the product of a poor childhood, and had been drinking and high when he and others pulled out guns and started shooting. Samuels said Watson had matured while sitting in jail for two years awaiting the resolution of his case. Several family members spoke in support of Watson at the sentencing hearing.

The prosecutor in the North Beach shooting case said investigators were unable to determine who shot first, or whether any of the shots fired by Watson had hit anyone.

Watson was the second defendant in the incident to be sentenced. Several other cases are pending.