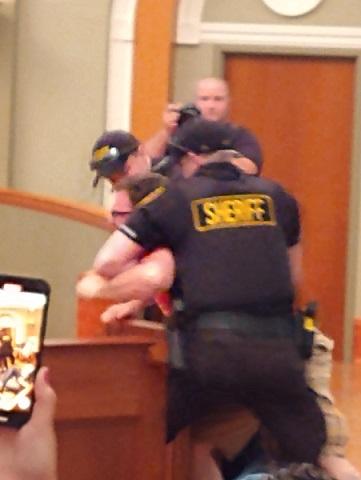 (WGTD)---He’s back. When we last saw him, Joel Trudell was in the process of being pried away from a Kenosha County Board podium during citizen comments after a verbal altercation with the county board chairman.

Trudell was hauled off, and jailed on charges of disorderly conduct and obstructing.

After his release from jail, the 43-year-old Kenosha man seemed to disappear from the public spotlight.

Trudell has yet to be formally charged.

Wednesday night, Trudell turned up as the lead witness at a public hearing conducted by the Kenosha County Racial and Ethnic Commission. He kept up his attack on local officials and their response to various issues.

Afterward, Trudell told WGTD he has a new attorney and will be showing up regularly again at public meetings. "I think I got some poor initial legal advice to remain quiet," he said. "I'm not following that anymore. I'll be at future meetings."

As for the possibility of formal charges, Trudell says he hasn’t heard a thing.

The case was kicked over to the Walworth County District Attorney’s office for review.