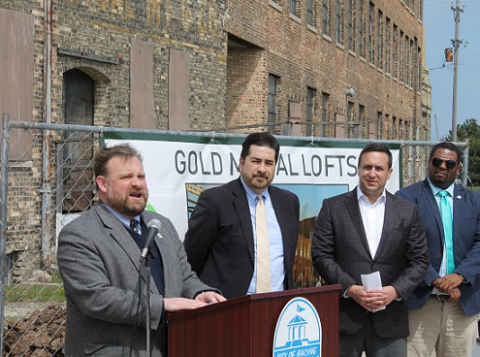 Racine---Another old factory building in the area is being converted into apartments.

Dignitaries gathered outside of the former Gold Medal Camp Furniture building at 1701 Packard Ave. Monday. They formally marked the start of a $18 million project to turn the 1890’s era building into 77 apartments. Some of the units will be what’s called “affordable” housing while others will rent at market rates.

In its hay day, Gold Medal made thousands of cots for the military and is also known for those Hollywood director's chairs. "This is a place where people came to work," said Mayor Cory Mason. "This is a place that helped to stabilize the neighborhood and the middle class in this area. Now I'm very excited to say that it'll see new life as a residential facility," he said.

The financing package, which took two years to assemble, includes both federal and state tax credits. The fact that some of the units will rent for below market value should not be perceived as a negative, according to the alder of the area, John Tate. "Affordable housing is not a dirty word," he said. "Affordable housing is habitable housing, healthy housing and sustainable housing. That's exactly what this district needs."

The project is a joint venture of Lutheran Social Services and J. Jeffers & Co.