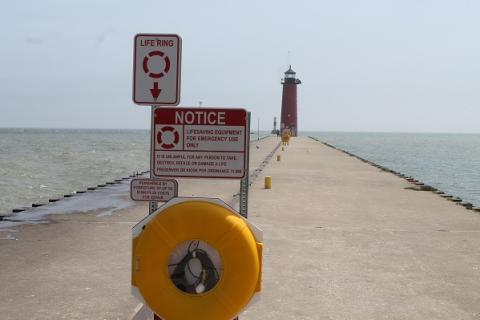 (WGTD)---Persistence paid off for a group of Kenosha aldermen who pushed to make life preservers available on the city’s north pier, the scene of several Lake Michigan drownings over the years.

Three kiosks containing the flotation devices were installed on the pier this week. Installation came just days after the city received final approval from the U.S. Army Corps of Engineers, the owners of the structure.

The ownership matter and liability issues were the main stumbling blocks that kept the city from acting any earlier. At this week’s city council meeting, Ald. Dave Bogdala said the battle was worth it. "Somebody's life is probably going to be saved this summer," Bogdala said. "And I think everyone in this room can take credit for some of that," he said.

Other kiosks with life rings have been installed on the south side of the harbor channel, and at the mouth of the Pike River on the city’s north side, another potentially dangerous spot for swimmers.

Anyone caught stealing or tampering with the kiosks and life rings could be fined up to $1,000 or jailed for up to three months.

Another recently-approved ordinance makes it illegal to swim near piers and jetties.