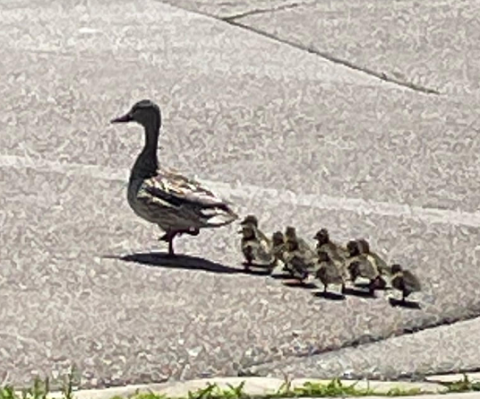 (WGTD)---Tyler Townsend and his girlfriend feared the worst when they arrived at the Stella Hotel's rooftop bar Tuesday to begin a second day of trying to capture and remove 10 ducklings from the bar. Neither the baby ducks or mom were immediately visible on the hot roof, but the pair saw blood ominously spotting the floor.

They eventually found the ducklings--huddled together in the shade--and mom hiding elsewhere. They soon theorized that the mother--out of frustration for not being able to lead her babies to water--had begun to pluck out her own feathers. "She was pacing back and forth for awhile," said Townsend, the Stella's chief building engineer. "It seemed like she was starting to give up," he said.

Unlike the day before, the Mallard didn't put up much of a fuss when Townsend was finally able to capture the ducklings and take them to the Stella's front yard. As hoped, mom--still on the roof-- heard the ducklings and glided down for a reunification. She then led them the eight blocks to the nearest body of water--Lake Michigan at the Southport Marina, an eight-block walk, or waddle if you will.

Townsend followed at a safe distance. Motorists cooperated by yielding the right of way.

The new family was last spotted swimming away.

The Stella's duck story began several weeks ago when Townsend was getting the bar ready for the season and noticed that a duck was nesting in a planter. The eggs hatched just this week.