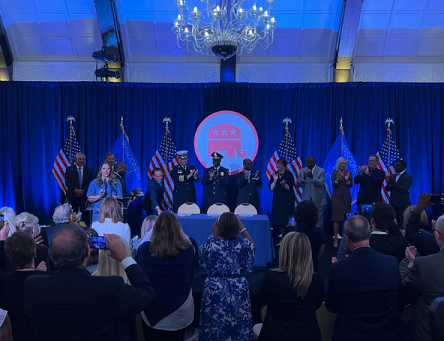 (WPR)---Milwaukee will officially be the site of the 2024 Republican National Convention, playing host to an event that could bring 50,000 visitors and millions of dollars to the city.

It’s a move by Republicans to try and take back Wisconsin after Democratic President Joe Biden narrowly defeated Republican Donald Trump in the 2020 Presidential Election. Wisconsin has been a crucial swing state in recent national elections.

Republicans will name their next candidate for President of the United States in a city that has been a Democratic stronghold for years as conservative leaders will likely be organizing and holding events near landmarks that bear the name of former Socialist mayors who once served the city.

The news was confirmed in a tweet Friday morning from Ronna McDaniel, the chair of the Republican National Committee.

The announcement came before a press conference with members of the RNC selection committee in Chicago Friday morning.

Milwaukee was also selected to host the Democratic National Convention in 2020. Several months of planning went into that event, as the city prepared to be in the national spotlight.  But the event was transitioned to a remote one after the COVID-19 pandemic forced organizers to shut down any in-person events. That was a blow to a city that was already reeling from the detrimental effects the pandemic had on the local economy.

Now, the city will once again have its shot at the spotlight.

Barry Burden, a professor of political science at the University of Wisconsin-Madison and director of the Elections Research Center, said bringing the convention to Milwaukee is a strategic move by Republicans to take back the state.

"It has a lot of political value being in a key battleground state and in the Midwest, where there are other states up for grabs," Burden said about the pick.

Burden also said it's not unusual for Republicans to pick a city that's so long been a stronghold for Democrats.

"They (Milwaukee) welcome the business," he said. "The parties have to hold their conventions somewhere and there really aren’t any major cities left in the U.S. today that are favorable to the Republican party in terms of voting patterns."

Democrats have historically performed very well in Milwaukee County. In 2020, Biden won nearly 70 percent of the popular vote in the county.

But Republicans have been increasingly dominant in smaller and more rural communities across the state.

Ben Wikler, the chair of the Democratic Party of Wisconsin, released a statement following the news.

"We congratulate Mayor Johnson and County Executive Crowley on their leadership in a step forward in attracting a major economic stimulus to Milwaukee. Meanwhile, we look forward to countering the GOP’s message of radicalism and division and ensuring that the Republican Party’s nominee loses Wisconsin again in 2024," Wikler said in the statement.

Republicans held their 2020 convention with limited in-person events in Charlotte, North Carolina. But in 2016, Cleveland hosted the convention.

A 2017 report from Cleveland State University found the economic impact from the 2016 convention was at $142.2 million. Before the event, many proponents also said the convention would generate around $200 million in economic activity.

The report also found the RNC supported 1,348 total jobs during the four-day event.

How it got here

In 2019, Milwaukee beat Houston and Miami to host the DNC.

This time around, the city beat out Pittsburgh, Salt Lake City and Nashville to get the RNC. The city has been working to host the event since last fall, officially putting in an application in December.

A video is played before the virtual DNC at a drive-in event Thursday, Aug. 20, 2020, at the Milwaukee County Zoo. Angela Major/WPR

Milwaukee quickly emerged as a prominent contender for the event. One month after submitting its application, Politico reported Milwaukee had become a finalist in the process.

Wisconsin Public Radio reported Milwaukee and Nashville were the front-runners for the convention in March.

And in June, the Milwaukee Common Council approved a framework agreement for the convention, laying the groundwork needed for the event to come to the city.

Earlier this week, the Nashville Tennessean reported Nashville council members voted down a draft agreement to host the convention, effectively removing Nashville from the running.