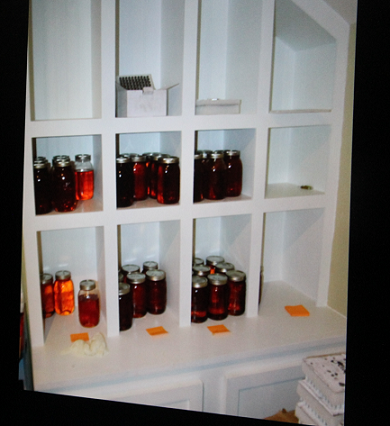 (WGTD)---The arrest of a 20-year-old Paddock Lake man for allegedly running a large-scale operation to fill vaping cartridges with potent THC oil began last July in Waukesha when two parents went to police to complain about their son's vaping habit.

At a joint news conference Wednesday, Waukesha Police Dept. Capt. Daniel Baumann said investigators traced the drug through five different levels of dealers. Allegedly at the top was Tyler Huffhines who was arrested last week after authorities searched his family's home in Paddock Lake and an upscale condo in Bristol where the packaging by some 10 employees reportedly occurred.

As has been previously reported, thousands of filled and unfilled cartridges were recovered, along with 57 mason jars of refined liquid THC said to be worth about $6,000 per jar.

Kenosha County Sheriff Dave Beth said the state crime lab is still analyzing what exactly was contained in the cartridges. But Huffhines, who's been cooperating with investigators, said it was THC oil.

Beth said it's still uknown where the cartridges were sold, or whether anyone had gotten sick or died from using them. Beth said he's asked federal authorities for help.

In recent months, six deaths and hundreds of lung illnesses have occurred across the nation by people who've been vaping. "They (the dealers) make it look like it's candy," Beth said. "We're all learning now how dangerous this is. Parents can not take this lightly," he said.

Huffhines is expected to appear in court Friday for formal charges. Although Huffhines' 23-year-old brother was picked up for a probation violation last week, Beth said the extent of his involvement is unclear. Beth said others could be arrested as well.