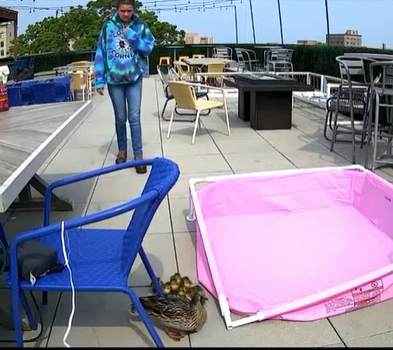 (WGTD)---The eggs that the Mallard duck had laid a few weeks ago in a planter on the Stella Hotel and Ballroom's rooftop bar have hatched.

Monday morning, about 10 ducklings, with mom in the lead, jumped out of the planter and onto the floor of the bar to start exploring.

Building chief engineer Tyler Townsend and his girlfriend welcomed the 'kids' by setting up a wading pool and laying out some duck feed. Townsend said he contacted the DNR, but they suggested that he try to remove the ducklings from the roof himself.

Turns out it's easier said than done.

Instead of flying off, as Townsend hoped, momma duck wouldn't let Townsend, armed with a box, near her babies. The thinking was to get the ducklings to the ground for a reunification with mom who could glide down.

"Duck Cam" video shows Townsend and his girlfriend cagily trying to trap the ducklings as they shadowed the family around the roof. They gave up after about an hour and plan to try again on Tuesday.

At this point, it's believed the ducklings aren't in any danger of falling off of the roof because of a ledge that surrounds the perimeter.